I have hundreds of hard to find parts, interior kits and real experience to help fill in the blanks on your Amphicar project.
See AMPHIPARTS for a PARTS LIST. 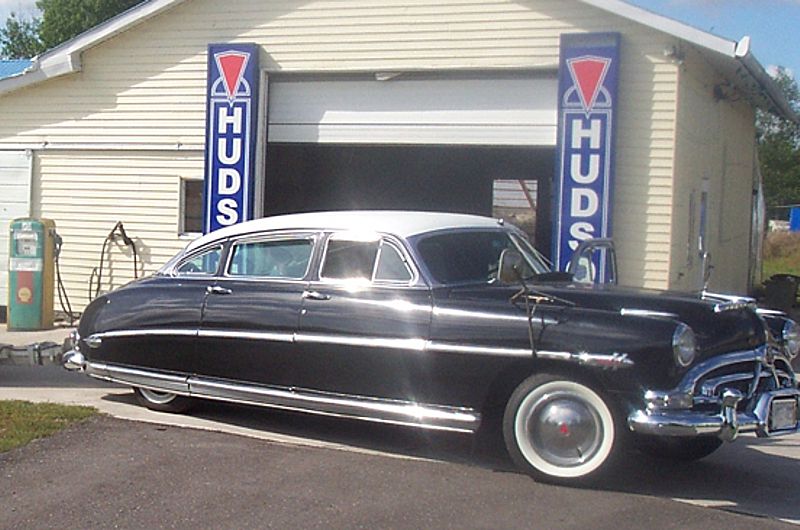 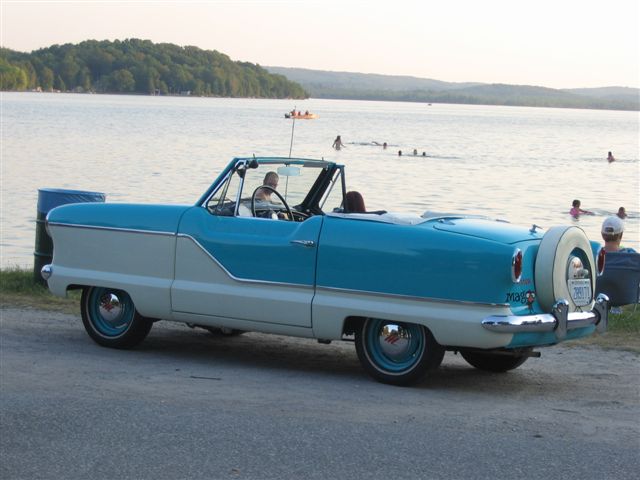 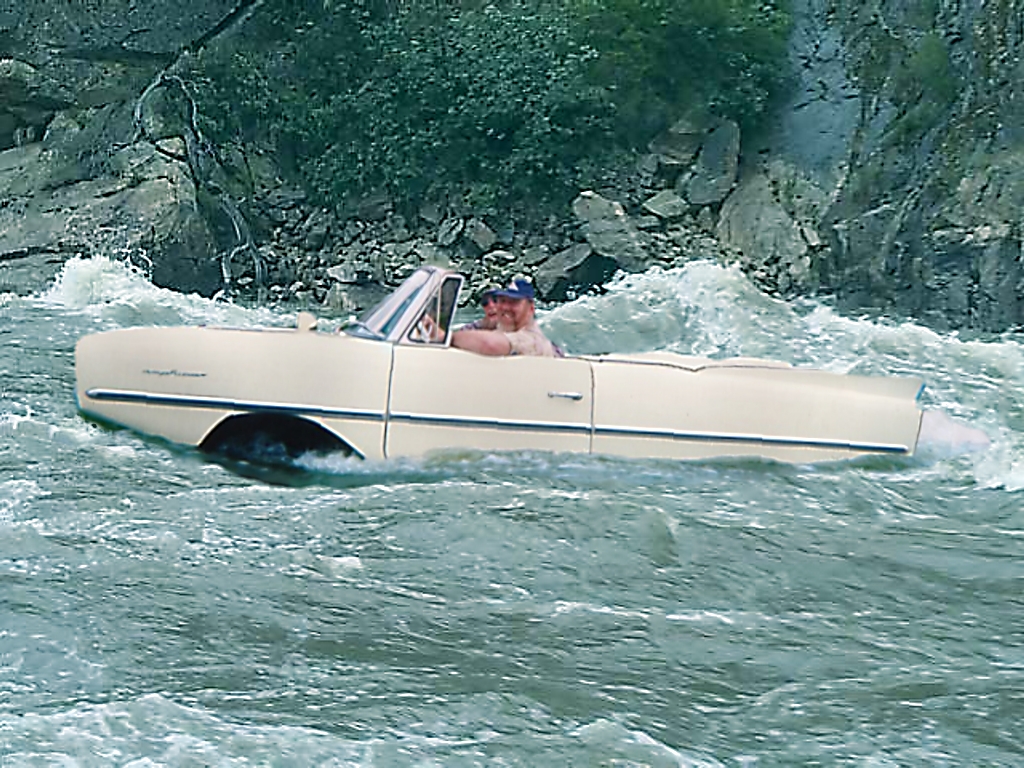 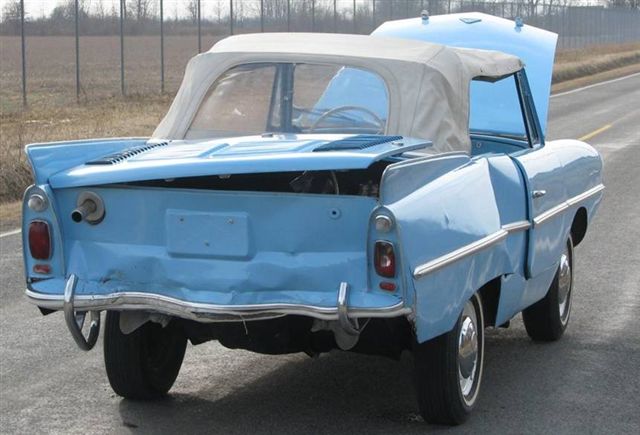 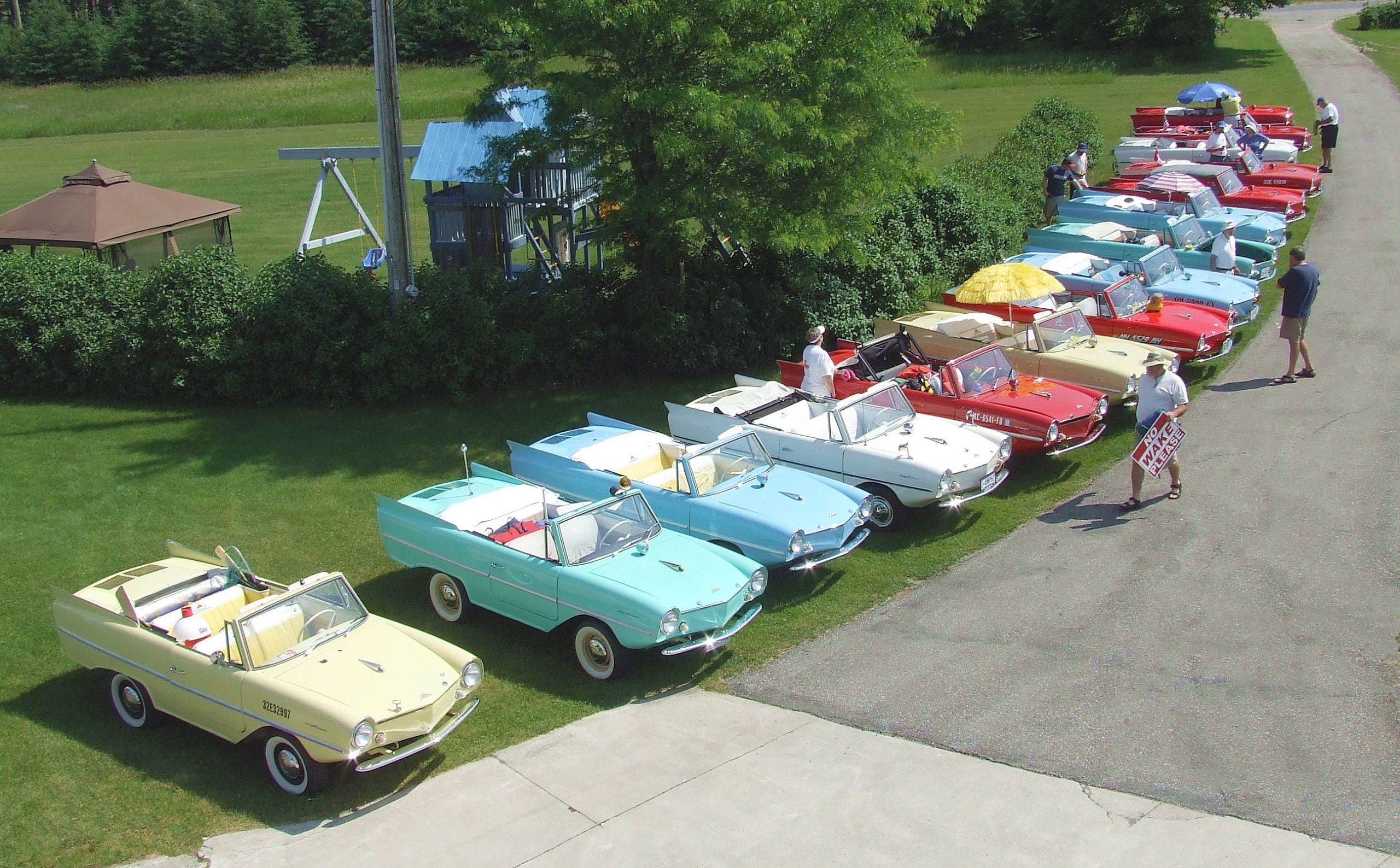 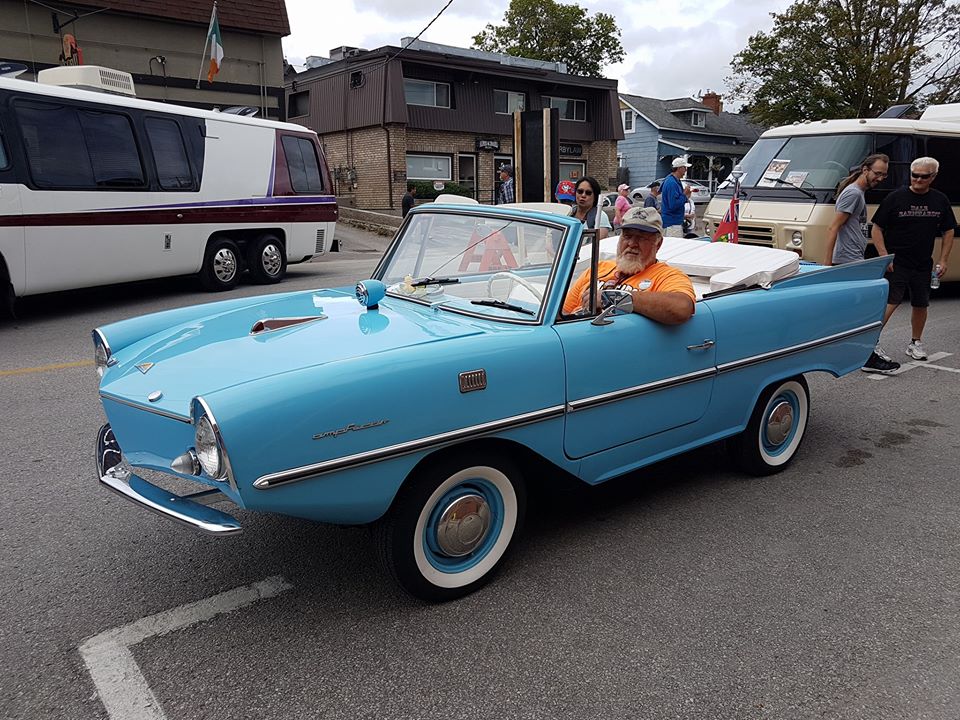 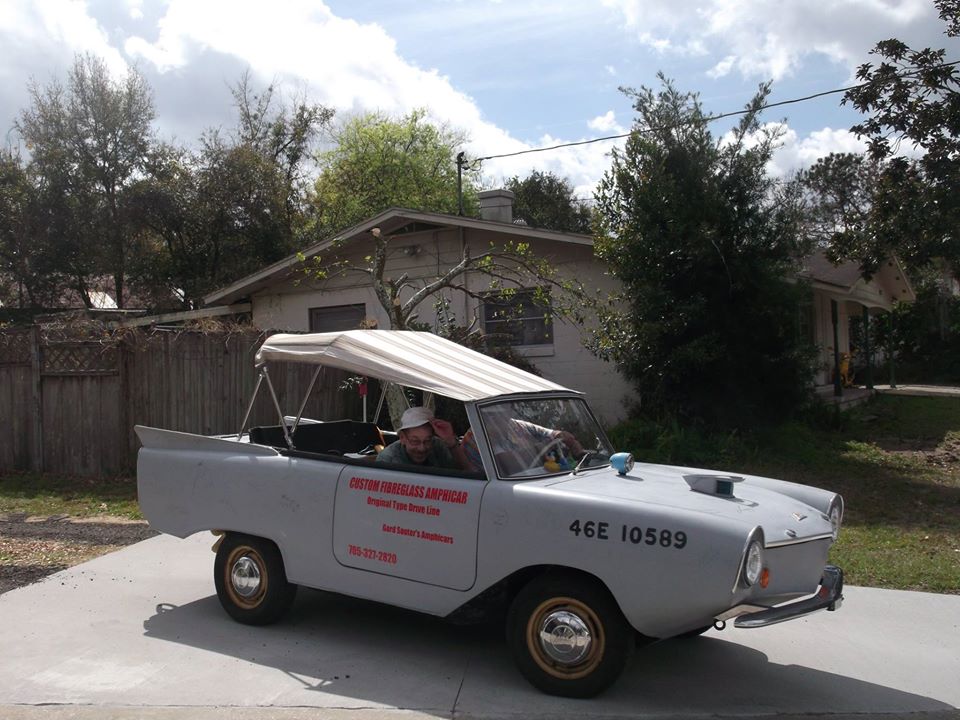 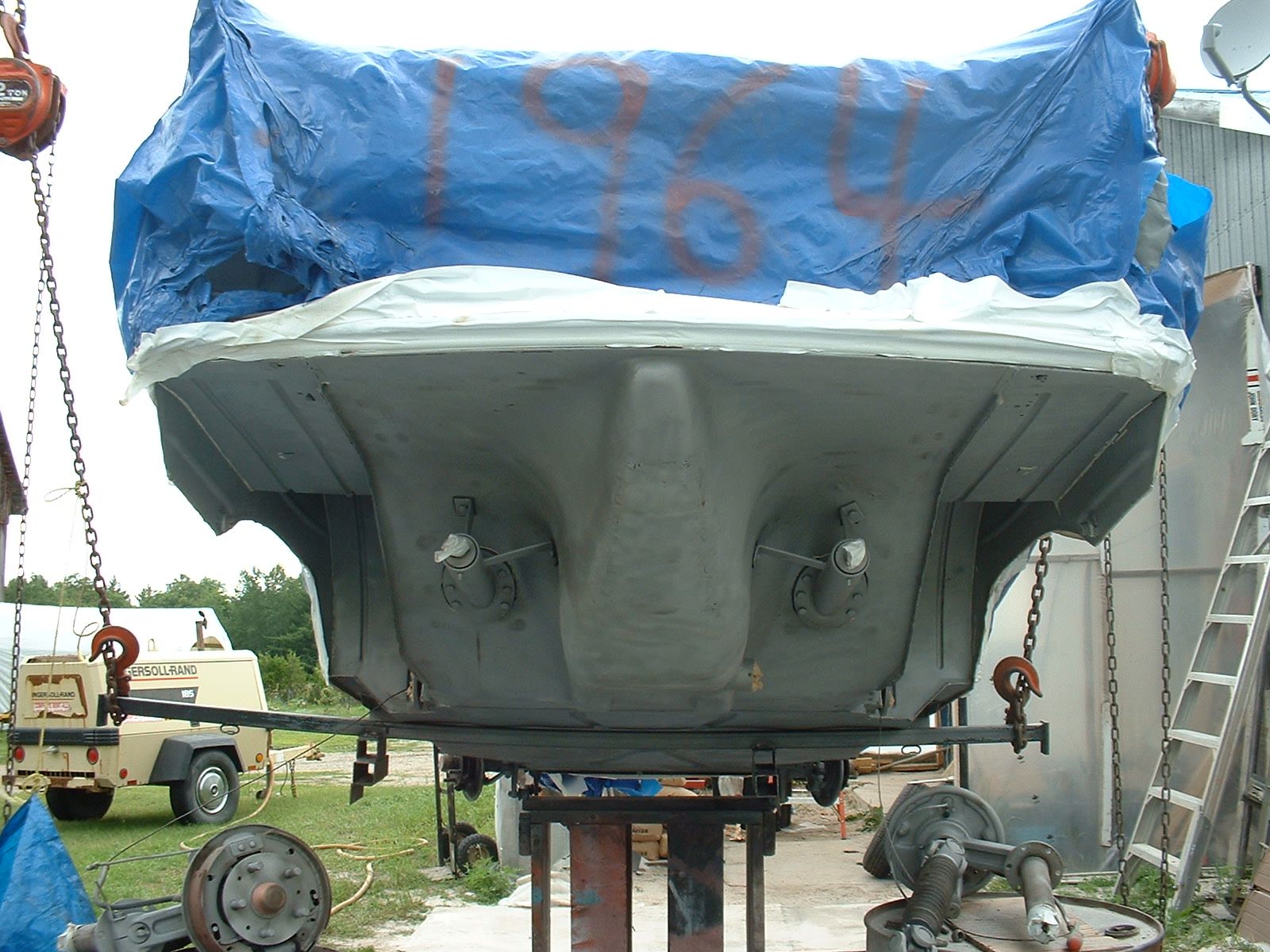 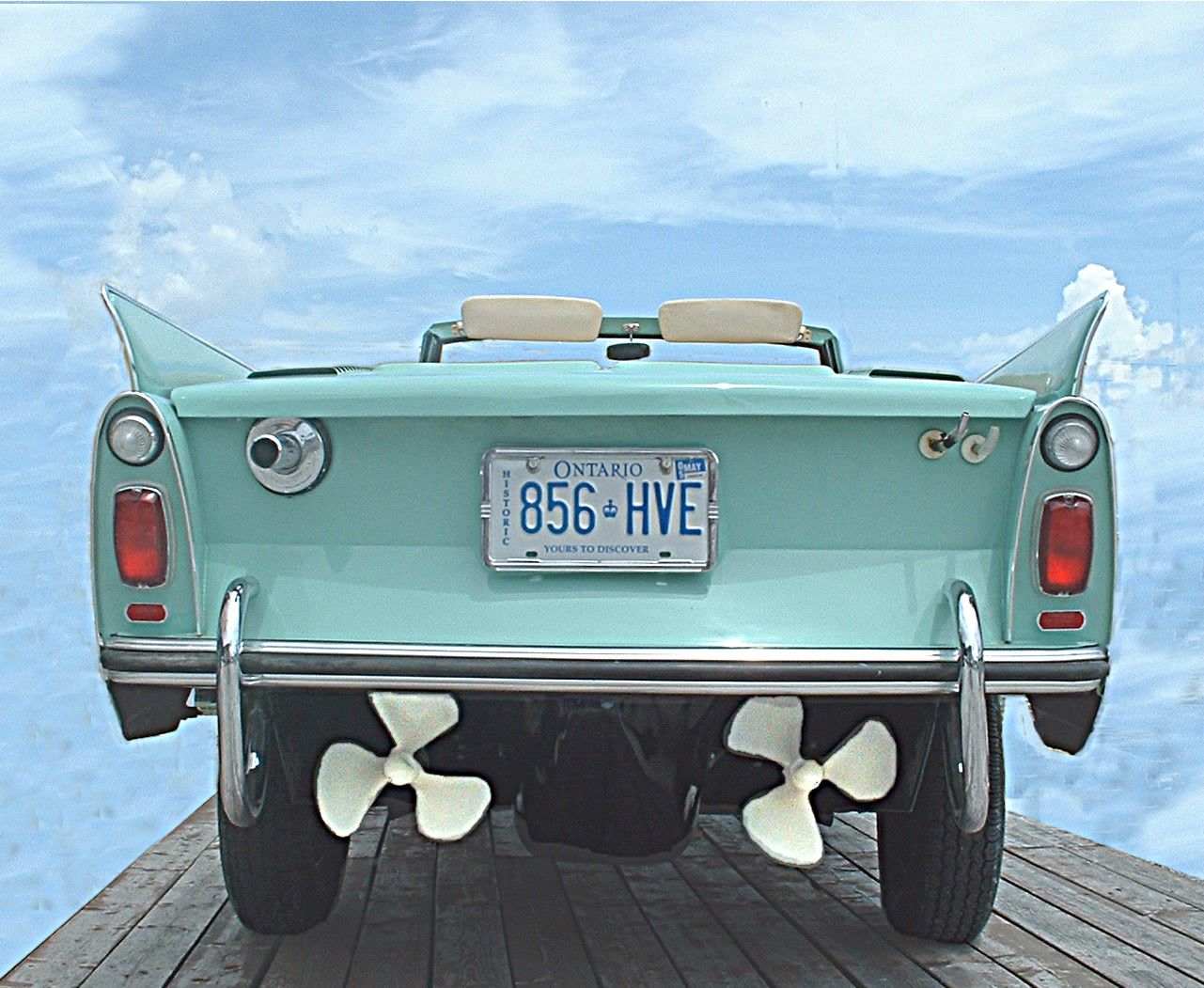 WHERE IT ALL STARTED

The Amphicar was built in Germany from 1961-1968.  Total production was about 3,700- 4000,vehicles depending on the source.  The Amphicar is the only amphibious passenger automobile ever to be mass produced.  There were 3,046 Amphicars imported into North America between 1961 and 1967.  No 1968 model year Amphicars were directly imported into the US.  This was because of new EPA and DOT regulations  for 1968 and later model years.  This caused a financial disaster for the Amphicar Corporation since the US represented about 90% of all Amphicar sales.

The Amphicar has a rear engine and uses a 4 cylinder, 1200 cc Triumph Herald motor, producing 43HP.

All Amphicars are convertibles and equipped with a custom 4 speed transmission built by Hermes (makers of Porsche transmissions). It is propelled in the water by twin screws.  The transmission allows the wheels and the propellers to operate independently or simultaneously.

The propellers also have a reverse. The front tires act as rudders and turn the car/boat in the water same as on road.

I think it all started back in the ‘50’s; my father was a Hudson dealer and mechanic in Hamilton Ontario, so I have always had a love of cars. I can remember seeing a BLUE Amphicar floating down the Grand River where we used to go boating with the family. WOW, now that was something.

Throughout the years I have had my share of vehicles, including a ’57 FORD-“yellow belly”; a Dodge van renovated from a Bell telephone repair truck; a Metropolitan; 1929 Model A Ford; even a couple of Volkswagen bugs, but I always remembered that Amphicar.

My Amphi history goes back to the Fall of 1994 when I answered an ad from the Buy and Sell shopper magazine that I had kept in my files for over a year.

The lady who answered had no idea what I was talking about at first but then, oh yeah, that was my ex’s and it’s in the shed out in the back still and you know what, I need a new coat for the winter. So, I hooked up an old skidoo trailer and was out to her place very quickly. Now, the ad had said it had no engine, but, it had nothing! No transmission, no interior and not even a windshield. I offered her $150.00 and she accepted.

Now I needed parts. So, I put an ad in the Shopper and to my surprise got a call. He had 4 parts cars. A deal was struck and, with the help of a bunch of great friends we got them home. Out of the 5 cars I have completely restored 2 Amphicars.

The first I painted blue and was finished by the spring of 1995. By the way, I have the winters free so this is when I do a lot of my restoration.

It was during this time that I met Rudy Steinmetz who lived about an hour away. He had 3 Amphicars and tons of parts. He was very helpful and sold me quite a few of the parts to complete my projects. When he was moving to Victoria BC he sold me one of his cars.

Over the next winter I completely disassembled the next car and sent it out to be acid dipped. Within a year this car was totally restored and painted white back to it’s original.

The blue car was my favorite and caused quite a stir around our lakes and at car shows.

I have trailered the blue ’64 to Florida twice for the Mt. Dora show. Last year I stayed down in Florida for a month and a half trying to get in every lake that had a ramp into it. The water was very low due to the drought and I got stuck in a hole once. My biggest scare was the day I forgot to put in the drain plug. I got back to the ramp just in time.

After the last Mt. Dora show I met up with Chuck Bortz and a deal was made. The blue Amp. Stayed behind.

On returning home the white car was revitalized for it’s first swim and I waited for the Orillia Boat Show with thousands of spectators for it’s debut. I’m not the shy type.

Minor leaks were found and sealed up over the next few weeks and I used an idea from fellow Amphi Dave Monier of Florida. I installed Lexan glass floors so you can see if there are any leaks.

I am having so much fun and meeting so many other Amph owners that it is time to move on to the next stage of this disease. As I am writing this I am on my way out to Victoria BC to buy Rudi’s remaining 2 cars and all of his Amphicar parts.

Rudy Steinmetz is one of the nicest and most honest and trusting man I have ever met.(aren’t all Amphicar owners)

At this point I have no idea what I have bought in parts as most were already boxed up for shipping when I got there but there are thousands!!!! This must be the 2 largest stock of Amphicar parts in North America. It will likely take me all winter to inventory it all.

As for the cars, I didn’t have much time to thoroughly go over them but, the 1st one is a red ’62 with a good interior and the other is a white ’67 and could be taken to shows as is but I think at this time my plan would be to totally restore both.

We loaded all of this into a 70ft. transport truck for shipping back to Orillia Ontario, over 3000 miles. I was very grateful to have a friend from my days of living out in Calgary now living in Vancouver and he very graciously came over with his father in law to help. Great time for a reunion too.

Rudy had made some aluminum ramps that would sit on the ledge of the trailer 4 ½ inches up. There was a small ledge there so we put some wood shims to make a smooth flow and strapped them down. As I drove the first car up and into the trailer the rear wheels spun on the plywood shooting the ramps down and out, the car fell down on the transport ledge just in front of the rear tires. Being inside the car I didn’t know what was going on, everyone was yelling. I just thought the car had bottomed out, I couldn’t get out of the car or remove my foot from the brake for fear of it tipping out of the trailer, I felt like I was in the movies sitting on the edge of a cliff.

The front of the car was then secured, back end jacked up and blocked, the ramps were reinstalled and we all pushed the car in the last two feet. No harm was done and we all had a good laugh after that.

We were more careful with the second car and hand winched it in. Then with everyone’s help we loaded the rest of the parts, including 2 spare engines,one is brand new.3 spare transmissions, again one is brand new. sheet metal panels(2 complete rear fenders with the hump) filling about 40 feet of the trailer.

After loading, Ruth, Rudy’s wife fed us all a great meal and the truck was on his way by 3 pm. I’ll be seeing him at my place in 6 days. He actually phoned yesterday from Manitoba telling me all was still secured and safe..

I have been too busy to finish this story, it is now 2010 and I am into restoring and selling parts for Amphicars full time.

CASPER the friendly ghost   SOLD in 2013

Bought in Tenn. on the way back from Mt Dora Florida.  A super clean car that was already painted but was not done inside. I stripped the car, sandblasted underneath and inside, painted and fully restored it.  White with red, red and white interior

Blue. Power train has been all done over, first test drive after restoration was fall of 2005.

Purchased in Ontario from the Ayckroyd family (Dan Aykroyd) .

The car is fully restored and finished in fjord green with a custom tan interior, top and rims. new transmission, motor only had 7500 miles so left alone.. ..of course a photo of the blues brothers on the back

In 2013 I began work on Fibreglass Amphicar, all external panels are Fibreglass. It has a custom interior and a bikini top like a boat. Is very light and Quick, handles good and swims hands off. I painted it Toyota Prius C Orange in 2015.